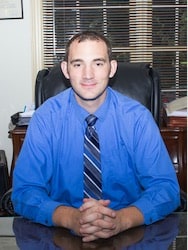 Chris’ modest disposition disguises an aggressive litigation philosophy. A self-proclaimed Civil War buff, his legal philosophy is best summed up by his favorite quote from Ulysses S. Grant: “The art of war is simple enough. Find out where your enemy is. Get at him as soon as you can. Strike him as hard as you can, and keep moving on.”

When not in the office, Chris is actively involved in the local community. He was recently elected the Second Vice-President of the Montgomery County Historical Society. Chris also became a wedding officiant in 2016 and has performed several wedding ceremonies since. His other hobbies include reading, traveling the country and hiking our National Parks.